Gautam Adani – CEO of Adani Group, A man who dreamt big and made it a reality 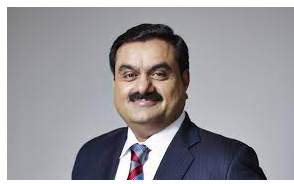 On June 24, 1962, in Ahmedabad, Gujarat, a Gujarati-Jain family welcomed an industrialist worth billions of dollars into the world: Gautam Adani. His mother is Shanti Adani, while his father is Shantilal Adani.

His father was a retailer of textiles. Gautam has seven siblings, and his parents left the small Gujarati hamlet of Tharad in search of better possibilities for their growing family.

Gautam received his education from Ahmedabad’s Sheth Chimanlal Nagindas Vidyalaya. He decided academics weren’t for him after enrolling in Gujarat University’s bachelor of business program.

Many people were startled when Gautam left college after his second year.

Gautam relocated to Mumbai, the City of Dreams, in 1978 as a teenager with just one hundred rupees. For two to three years, he was a diamond sorter for Mahendra Brothers.

At the same time, Adani opened his own diamond brokerage business in Mumbai’s famous Zaveri Bazaar.

In 1981, Gautam’s older brother Mansukhbhai Adani purchased a plastics manufacturing facility in Ahmedabad and asked him to run the company. Gautam Adani began his primary polymer import company to serve small-scale companies. In 1985.

Adani Enterprises Limited has expanded its business into a variety of sectors, including logistics, resources, energy, aerospace, agriculture, and defense. Adani Exports Limited is active in port construction and management in India.

Adani began enlarging his company’s operations in 1991 by entering the selling of agricultural goods, textiles, and metals. The Gujarati government awarded Adani a contract in 1993 for the management outsourcing of the Mundra Port.

Priti Adani, a dentist who founded and serves as managing trustee of the Adani Foundation, is married to Adani.

Adani launched its first jetty in 1995, which Mundra Port & Special Economic Zone ran. The largest private-sector port in India, Mundra Port has a handling capacity of more than 200 million tonnes of cargo annually.

Adani started generating electricity in 2006. He purchased Carmichael Coal in Queensland and Abbot Point Port in Australia between 2009 and 2012.